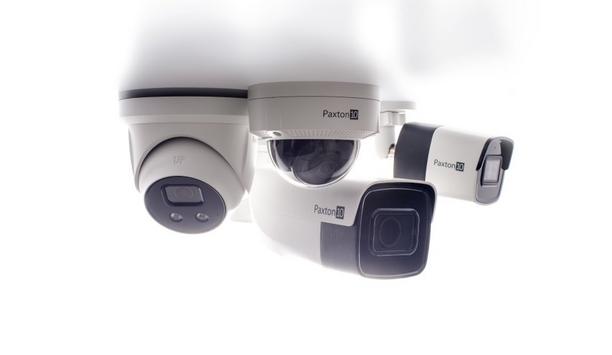 Paxton Inc. is pleased to announce that they have updated their Paxton10 camera offering, adding a CORE Series of cameras, alongside the existing PRO Series. The Paxton10 system combines access control, video management, free Bluetooth smart credentials, feature-rich software and now, the CORE and PRO Series of cameras. Edge processing  The new CORE Series cameras feature edge processing for ultimate scalability, built-in edge storage, and plug-and-play installation. The addition of the CORE Series gives installers new hardware, more options and better value than ever before. Paxton has also reduced the price of their PRO Series cameras, providing a tailored video management solution at a cost-effective price. CORE Series of mini-dome and mini-bullet cameras The CORE Series of cameras includes mini-dome and mini-bullet options, both featuring 64 GB of built-in storage The CORE Series of cameras includes mini-dome and mini-bullet options, both featuring 64 GB of built-in storage and 4 MP resolution, at an incredibly competitive price. A turret option will also join the CORE Series soon. The CORE Series features the same high-build quality as the PRO Series, containing the required features to meet market expectations and make the Paxton10 system a suitable option for a wider variety of installations. Paxton10 system Jeremy Allison, Paxton’s Senior Product Manager explains, “The introduction of the new CORE Series cameras is the next step in the evolution of our innovative new system, Paxton10. Following the U.S. launch in February, we have taken the feedback from our valued dealers to refine and improve our camera offering to suit the needs of the market.” Jeremy Allison adds, “The real standout feature of our cameras is the edge processing capability, both the CORE and PRO Series cameras, include built-in storage to allow video footage to be processed and stored at the edge. This eliminates the need for expensive NVR'S and reduces installation time.” With this latest product launch, Paxton are pleased to offer a broader range of cameras, while retaining the simplicity that Paxton is known for, with a cost-effective CORE Series and feature-rich PRO option.

Paxton’s longstanding access control system, Net2, receives its latest software update. The highly anticipated new feature, Checkpoint Control, supports COVID-secure sites. This additional functionality helps Net2 users protect employees and visitors by monitoring and approving people as they enter buildings. Throughout the first half of 2020 the creation of Checkpoint Control was underway, along with the unforeseen global spread of the coronavirus COVID-19. During this time lockdown and social distancing restrictions in many countries heightened the need for the update to be rolled out globally, in a timely fashion. Since then Paxton’s Development team has worked tirelessly preparing the release alongside other vital COVID-secure Net2 updates. Thermal scanning hardware Paxton’s U.S. Senior Product Manager Jeremy Allison said: “At Paxton, people are at the heart of everything we do and this year our focus is bringing people back to work safely. Following on from the successful introduction of Occupancy Management, we are introducing Checkpoint Control. Designed to help businesses ensure their COVID-secure guidelines are being followed before staff enter a site.” Designed to help businesses ensure their COVID-secure guidelines are being followed before staff enter a site" The Checkpoint Control functionality follows on from Paxton’s successful introduction of Net2 Occupancy Management and integration with thermal scanning hardware. Both were released for Net2 in July 2020. These features work simply and seamlessly together to reduce the risk of spreading COVID-19 around populated buildings. Temporary access levels Jeremy Allison further explains “Net2 Checkpoint Control allows a site to assign temporary access levels to one or more users that will remain in place until they have either been manually validated or badged through a specific door. This allows Net2 system administrators to ensure all staff and visitors pass through a designated checkpoint at a frequency that can be configured to suit the business requirements." "It also offers the flexibility to split staff between multiple checkpoints to help maintain social distancing and not overrun an area”. Access permissions feature Checkpoint Control works in just two simple steps: Step 1: System Setup Specific doors or areas of a building are designated as checkpoints, such as the main entrance or reception. End users are then given access to that checkpoint using their normal access token, with the limited access point managed via the access permissions feature within the Net2 software. Step 2: A manual or automated verification takes place to validate further site access Access can be verified manually in person or by using technology to support automated validation. The automated process works by identifying a person via their access credentials, which can then be followed by a thermal scan to further increase protection against the spread of Coronavirus. Once identity, and where relevant, an individual’s health and well-being has been approved, the checkpoint will validate and grant further building access. Virtual traffic lights Paxton has produced an on-demand webinar called the definitive guide to COVID-secure buildings Net2 v6.05 also includes new functionality to further enhance the Net2 Occupancy Management feature. New virtual traffic lights can be used on screens to indicate occupancy levels with no need for integrated traffic light hardware. This will further support social distancing by informing the end user of whether the current occupancy of the area they are about to enter is safe for them to do so, working alongside Checkpoint Control to reduce bottlenecks and overcrowding. Occupancy Management override is also included in this new update. Should there be an emergency, this functionality allows selected people to enter an area that is at capacity, such as a first aider or senior manager. Checkpoint Control and the new additions to Occupancy Management functionality are available exclusively with Net2 Pro software. In conjunction with the updates, Paxton has produced an on-demand webinar called the definitive guide to COVID-secure buildings. This is an ideal starting point for installers looking to understand more about social distancing and COVID-secure guidelines.

Paxton Access Inc. has added to their video intercom product line by launching the next generation standard monitor, the Entry Standard monitor. Designed with simplicity in mind, this versatile monitor offers a feature-rich and cost-effective solution for a range of applications, from schools and hospitals to offices and apartments. Like other Paxton products, this new Entry Standard monitor is engineered with a focus on simplicity and ease-of-use. Excellent audio quality, full-duplex voice communication and a clear user interface on a 4.3” capacitive touch screen make it the ideal solution for users. The monitor can be quickly and easily installed either on a wall or desk mounted with or without a handset. Networked access control system The premium user interface with call and event log can be easily personalised with 14 different theme designs. A smart new call snapshot feature enables the users to see their missed calls, so they never miss a visitor again. The whole Entry video intercom system consists of three components that auto-detect on set up; external panel, interior monitor and door control unit. This monitor is a real plug and play solution that can be used with a range of panel options, standard, premium and vandal resistant, making the whole system flexible for a wide variety of sites. The Entry video intercom system is fully compatible with Paxton’s cutting-edge Net2 networked access control system, as well as working as a standalone solution. It comes with Paxton’s five-year warranty. Clean user interface The monitor features a glass covered capacitive touch screen and high-quality front facing speaker" When integrating Entry video intercom with Paxton’s Net2 access control system, the standard monitor features action buttons giving customers an additional layer of control with functionality like opening other doors on the system or unlocking external gates. Jeremy Allison, Paxton’s Senior Product Manager, says, “The second-generation Entry Standard monitor blends contemporary aesthetics with high quality materials and clean user interface. Designed to fit into any environment with a variety of different themes, it allows the user to personalise the monitor to suit their tastes." High-quality front facing speaker "The monitor features a glass covered capacitive touch screen and high-quality front facing speaker. Designed with simplicity in mind for both the installer and system user, there is no programming required.” The Entry Standard monitor is available to purchase from Paxton’s approved U.S. distributors. Paxton is introducing their latest solutions to the market via a free 45 minute installer and integrator, which can be accessed through the company’s official website.

Paxton welcomes a new Senior Product Manager to the United States team, bringing with him a wealth of knowledge and experience of the access control market. Jeremy Allison will be based in Greenville, SC, and will oversee the development of future products, making sure they meet the demands and expectations of the growing US market. With over 15 years’ experience in CCTV and control systems, Jeremy has worked as a product manager for a security company and has run his own integration company. Product management team The company has a really positive atmosphere and I can’t wait to get started" He said, “I’m excited to be working with such a creative and talented team at Paxton - this really is the perfect role for me. I’m looking forward to sharing my knowledge and experience, while further developing my skills using Paxton’s world-class systems. The company has a really positive atmosphere and I can’t wait to get started.” Paul Bannister, Paxton’s Research Director said, “I’m absolutely delighted that Jeremy has joined our product management team, heading up the US side of the department, and bringing 15 years of experience with him. We’re looking forward to working with Jeremy to deliver the world-class products our customers expect, resulting in continued growth for our important US market.” Access control industry Jonathan Lach, VP of Sales at Paxton Access, Inc. said, “Jeremy has a wealth of knowledge of the access control industry, and he will make a fantastic addition to the team.” Jeremy will be working to develop Paxton’s brands: Net2 – simple access control Net2 Entry - innovative video intercom PaxLock – access control in a wireless lockset