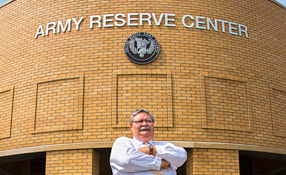 AlliedBarton actively seeks out and hires family members of veterans through employer assistance groups  AlliedBarton Security Services implemented its program to hire retired service veterans five years ago. “Our CEO Bill (William C.) Whitmore announced one day that ‘we’re going to have a lot of American heroes coming home soon, and I want to give them jobs,’” said Jerold Ramos, Director, Strategic Recruiting and Military Liaison with AlliedBarton. “Bill thought it was the right thing to do.” Pennsylvania-based AlliedBarton has earned praise from veteran assistance organisations for its program called Hire Our Heroes. “The Wounded Warrior Project says, for instance, that we are by far the largest employer they have in the country,” continued Ramos. Other groups have recognised AlliedBarton’s commitment to veterans. Victory Media, publisher of G.I. Jobs and Military Spouse magazines, for example, has named AlliedBarton a 2015 Top 100 Military Friendly Employer. About 18,000 of AlliedBarton’s 60,000 employees are veterans — 30 percent of the total. Good for business “Turns out, it’s more than the right thing to do,” said Ramos. “It has also been good for business.” Some veterans, of course, have years of security experience — patrolling facilities and monitoring video, access control and alarm screens in security control centres. Their experience ranges from security officer to manager. Ramos added that security is only one skill that veterans offer. “While we provide security services, we’re a large company in need of all the corporate support services that any large corporation needs: IT, HR, legal, financial, administrative, public information and so on. Veterans offer all of these kinds of skills.” Moreover, veterans are accustomed to undergoing training and learning new disciplines, making them potential candidates for any company department, observed Ramos. Additional qualities include dependability and the ability to perform under pressure. Finally, Ramos said that AlliedBarton found that employing veterans cuts costs. It has reduced training costs as well as high fees for background screening — veterans have already been well screened. Companies can also earn tax credits, ranging from $3,000 to $9,600 per hire, for employing veterans. Finding veterans AlliedBarton has earned praise from veteran assistance organisations for its program called Hire Our Heroes The hard part of hiring veterans may be finding them. AlliedBarton’s Hire Our Heroes program makes a science of finding veterans. The company has formed partnerships with many military assistance groups that help veterans find employment. These groups include Employer Support of the Guard and Reserve, Wounded Warrior Project, HireVeterans.com, American GI Forum, Coalition to Salute America’s Heroes, the National Guard and others. “At their sites, employers can post jobs and look up resumes,” Ramos said. “Our recruiting strategy includes visiting the local offices of our partners in person. We use the national office to find the local partner. I can’t emphasise how important knowing your local partners personally is. “You also have to brand yourself as a veteran friendly company,” he adds. “We get calls from Afghanistan about employment. Their friends here have told them that we are veteran-friendly, and they call.” The company actively seeks out and hires family members of veterans through employer assistance groups from the Veterans Administration and Department of Defense. Those efforts led Victory Media to name AlliedBarton as a 2015 Military Friendly Spouse Employer. “Military families have different needs than civilian families,” said Ramos. “Because of military service of a family member, the family may live in an area with few job opportunities. We recruit in those areas. “If a service member is deployed, and the pay isn’t enough to keep the family going, we want to provide a job for family members — if the family can’t make it, that service member will fail, too, and come home. We want to prevent that if we can.”

Ranking fifth out of the Top 100, this is AlliedBarton's fourth consecutive recognition AlliedBarton Security Services, the industry's premier provider of highly trained security personnel, has earned the 2015 Top 100 Military Friendly® Employer designation by Victory Media, publisher of G.I. Jobs® and Military Spouse. Ranking fifth out of the Top 100, this is AlliedBarton's fourth consecutive recognition. "AlliedBarton is honoured to receive this recognition for the fourth consecutive year," said Jerold Ramos, AlliedBarton's Director of Strategic Recruiting/Military Liaison. "This Veteran's Day, I am excited to see more companies making the commitment to hire military. The next challenge for corporate leaders is to ensure that these American heroes stay and thrive at their company. The retention of veterans, reservists, their families and caregivers should be every organisation's priority." In 2014, AlliedBarton has hired more than 3,850 veterans, reservists, their family members and caregivers and is on target to reach its goal of 5,000 hires per year for five years as part of its pledge though the Joining Forces campaign. Companies competed for the elite Military Friendly® Employer title by completing a data-driven survey, with data independently tested by Ernst & Young LLP based upon the weightings and methodology established by Victory Media and its Advisory Board. Criteria for the survey included a benchmark score across key programs and policies, such as the strength of company military recruiting efforts, percentage of new hires with prior military service, retention programs for veterans, and company policies on National Guard and Reserve service. "The 2015 Military Friendly® Employers represent the preeminent tier of companies with strong military recruitment programs and meaningful job opportunities for transitioning service members and spouses," said Sean Collins, Vice President for Victory Media and a nine-year Navy veteran. "Our Military Friendly® Employers constitute the group of companies moving the needle and realising significant benefits by hiring from the military community. This year's group of companies reported hiring over 155,000 service members and spouses over the last 12 months, representing a 35% increase over last year and an average of 15% of total new hires."

Through AlliedBarton's military hiring program, the company hired more than 5,000 veterans and reservists in 2013 AlliedBarton Security Services, the industry's premier provider of highly trained security personnel, is proud to be featured as a top veteran-friendly company by U.S. Veterans Magazine for the second year in a row. The results were announced in the magazine's 2014 "Best of the Best" list which recognises companies committed to hiring veterans. "Each year, AlliedBarton works to evolve our military hiring efforts," said Jerold Ramos, Director, Strategic Recruiting/Military Liaison, AlliedBarton. "It is an honour to be recognised for our dedication and military hiring accomplishments as a Best of the Best Company by U.S. Veterans Magazine." U.S. Veterans Magazine polled hundreds of Fortune 1000 companies for this year's Best of the Best evaluations. USVM's goal is to open up employment, business and supplier opportunities within the federal government and corporate America for veterans, transitioning service members, disabled veterans, spouses and veteran business owners. The annual review is an evaluation of the nation's employers, initiatives, government agencies and educational institutions. These nonbiased studies are valuable resources for jobseekers, business owners, students, consumers, senior management, business associations, employment agencies and consumer groups. "Veterans are entrepreneurial, they assume high levels of trust, and they're resilient," said Mona Lisa Faris, president and publisher of the U.S. Veterans Magazine. "This magazine was created to support our troops, and we at USVM are proud to recognise other businesses that are also making veterans a priority." Through AlliedBarton's military hiring program, Hire Our Heroes(SM), the company hired more than 5,000 veterans and reservists in 2013, and is on track to do the same in 2014.