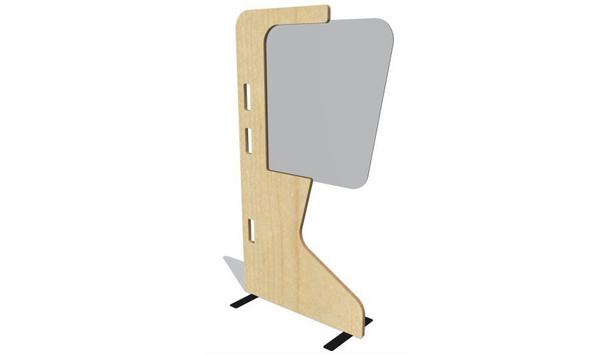 Custom Consoles announces a new addition to its range of technical control furniture. Developed in response to the coronavirus pandemic, the Operator Safety Screen reduces the risk of airborne infection or direct physical contact between control room personnel without restricting their forward or side view of video monitor displays. "We designed the Operator Safety Screen following discussions with some of our largest customers," says Custom Consoles Managing Director Neil Reed. "Most technical control rooms and edit suites are well air-conditioned but Covid-19 has raised health and safety concerns to a significantly higher level. We responded promptly to the challenge with a space-efficient screen which can be installed quickly and easily wherever control room staff are working in close proximity." Rigid low-profile floor supports "The Operator Safety Screen is designed to fit our Module-R series of technical furniture but fits all other desks in our product portfolio and those manufactured by other furniture companies. The Operator Safety Screen has already generated orders totalling several hundred from broadcasters such as Al Jazeera, Amazon, BBC Studio Works, IMG, QVC, STV and Timeline as well as many others," adds Sales Manager Gary Fuller. "This makes it one of the fastest selling new products in Custom Consoles' history. Each screen comprises a strongly built birch plywood main frame with rigid low-profile floor supports. A transparent polycarbonate panel bonded into the upper section of each frame gives operators a clear view of all equipment and colleagues to support their normal workflow. Handgrips are integrated into each frame for easy relocation."  Custom Consoles' Operator Safety Screens are available now. 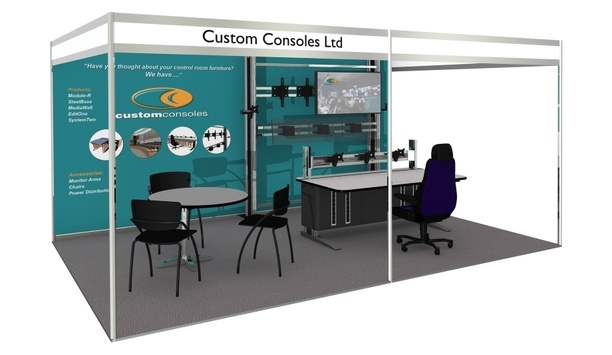 Custom Consoles has selected SCTX 2019 in London, March 5th and 6th, for the first exhibition of its latest MediaWall monitor mounting system. Representatives on the company's stand, L50, will include Neil Reed (Managing Director) and Gary Fuller (Sales Manager). The stand itself will be expanded from last year to accommodate MediaWall plus an example from the Custom Consoles SteelBase Lite desk series. MediaWall monitor mounting system "Originally developed for the broadcast industry, MediaWall has proved highly successful for technical control applications in security and process monitoring," Neil Reed comments. "A free-standing flat screen mounting solution for flat-panel monitors of practically any size, it incorporates adjustable horizontal beams with T-slot mounting to allow easy configuration." Integral cable management conceals video, data and power cables" "Integral cable management conceals video, data and power cables. Redesigned lateral support beams in the latest version allow display panels to be mounted even more easily than before. Cable management is inside stronger and more attractively styled steel ducts rather than plastic. The supporting leg sides are now in black instead of silver, matching the latest Custom Consoles Module-R desk styles." Flat-screen monitor displays MediaWall allows flat-screen monitor displays of practically any width to be constructed from standard horizontal and vertical support elements. It can be used as a fully self-supporting structure or coupled directly to a studio wall. Individual screens can be positioned so that the edges meet exactly to form a continuous horizontal display limited only by the boundary of the monitor panel itself. All wiring is fully concealed and can enter or leave the structure at any desired point. Media Wall is available in any specified element widths. SteelBase Lite is built to withstand the wear and tear of the utilities and marine industries" "We will also be exhibiting an example from our configurable SteelBaseLite desk series," adds Gary Fuller. "SteelBase Lite is built to withstand the wear and tear of the utilities and marine industries while still providing ergonomic efficiency and attractive styling. The desks are built on extremely robust steel base frames with desktops surfaced in a choice of hard-wearing laminate or Marmoleum." SteelBase Lite desk series "Additional design features of the SteelBase Lite range include hinged removable access doors, 19-inch equipment racking, heavy cable management, power distribution panels and variable-speed ventilation fans. Worktops can be configured to suit individual client requirements. All elements of the desks are guaranteed against component failure for five years of normal use. SteelBase-Lite is designed to conform to ISO9241 part 5, ISO11064 Part 4 and EN527 Parts 1, 2 and 3." 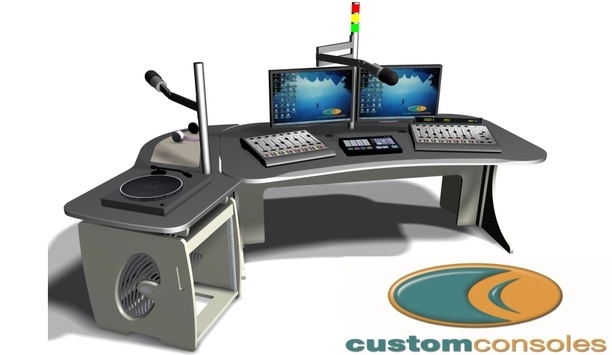 Custom Consoles reports sustained high demand for technical furniture across the broadcast and wider engineering control markets. The past year alone has included major projects for RTL City in Luxembourg, RT's new production studios in Paris, EVS in Liège, TV3 in Dublin, Netherlands-based virtual reality studio Miraga3D and the London studios of satellite broadcaster Al Sharqiya. Custom Consoles also marked its 21st anniversary year with the introduction of the EditOne-Radio desk. "We are seeing growing investment right across the broadcast media business as it responds to the opportunities created by technical advances such as IP-based interfacing, 4K ultra-high definition, high dynamic range and IPTV streaming," stated Custom Consoles's Sales Manager Gary Fuller. "Demand for technical furniture in the broadcast and independent studio sectors remains very strong across Europe, Asia and Australasia.”Completed in partnership with Megahertz, the project was a mix of Module-R and EditDesks plus MediaWalls and MediaPosts Video walls and studio desks "By far our largest project in recent months was for video display walls and very large number of studio desks at the new RTL City building. This was a greenfield-site development with technical facilities on three floors. We designed, manufactured and installed nearly 50 desks, five large MediaWall monitor mounting frames and about 20 standalone MediaPosts." "Our systems integration partner in the project, Broadcasting Centre Europe, made a very careful study of the available furniture products before choosing Module-R and EditOne desks. Samples were sent for evaluation and we also provided constructive ideas based on the high level of design flexibility made possible by combining elements within the Module-R product range.” "We also completed a large-scale studio furniture project for global television news network RT. Located in Paris, this new facility was equipped with two master control rooms, engineering and audio control, audio post-production, two dubbing suites, an Avid ProTools suite, five edit suites, and a graphics suite. Completed in partnership with Megahertz, this was a mix of Module-R and EditDesks plus MediaWalls and MediaPosts.”EditOne-Radio can be configured to match a wide range of audio production environments SteelBase-Lite series "In the wider engineering control sector, we provided desks from our SteelBase-Lite series for a CERN control room assigned to heavy magnet testing. This was our second major order from CERN following the selection of SteelBase and Steelbase-Lite for the LHCb control room and cryogenics control room in 2016." "At IBC 2017, we introduced the EditOne-Radio desk for use in radio interview suites, presentation studios and voiceover booths," adds Custom Consoles Managing Director Neil Reed. "EditOne-Radio can be configured to match a wide range of audio production environments including live radio broadcasting. Developed from our established EditOne edit suite desk, it shares the same modern styling and goes beyond traditional studio furniture construction by using sculpted MDF support panels rather than metal legs." "Studio guest work surfaces can be attached to the left or right side of the EditOne-Radio desk, or on both sides, bridging across to an optional pedestal accommodating up to 11 rack units of equipment." 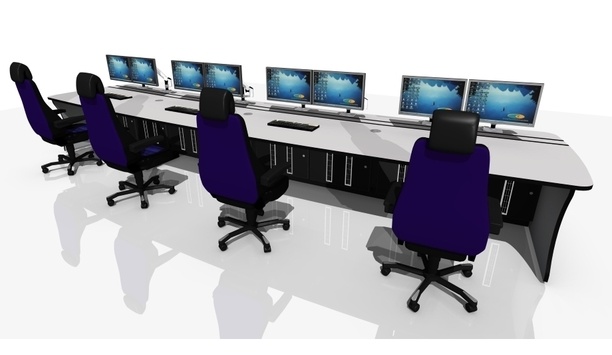 Custom Consoles will promote its full range of security control room desks and video monitor mounting systems at the Security & Counter Terror Expo (SCTX), London Olympia, March 6-7, 2018. Exhibiting on stand D89, the company will be represented by Neil Reed (Managing Director), and Gary Fuller (Sales Manager). SteelBase-Lite desk Central feature of the Custom Consoles exhibit will be a SteelBase-Lite desk. This can be configured to provide an ergonomically efficient working environment for any size of control room. In addition, Custom Consoles are also providing a control desk from its SteelBase range for the Integrated Security exhibit, which will be one of the main features at the show. Widely used in defence, surveillance and critical process control applications where they can be specified for single-operator or multi-operator environments. SteelBase desks are built on 19-inch steel base frames. Desktops are surfaced in a choice of hard-wearing laminate or marmoleum. Additional design features of the range include hinged removable access doors, 19-inch equipment racking, sliding equipment trays, heavy cable management, PC sliding mounts, power distribution and data panels, and variable-speed ventilation fans. Worktops can be rectangular or curved, including angled or curved corners and optional curved-front-profile side panels. All elements of the desks are guaranteed against component failure for five years of normal use. SteelBase has been tested by FIRA and certified to conform to ISO9241 part 5, ISO11064 Part 4, EN527 Part 1, 2 and 3. Master control rooms Steelbase-Lite is a compact and cost-efficient variant. Each unit incorporates a PC storage base with two hinged removable access doors at front and rear. All doors have ventilation ports running almost the full height. Each SteelBase-Lite desk unit is equipped with cable management ducts plus easy cable access from the computer housing via a brush strip running the full width of the worktop. Adjacent to this is a video display support frame with two VESA monitor mounts, which attach to height-adjustable horizontal aluminum-frame beams. Robust steel arms and profiled legs integrated with the main desk unit give SteelBase-Lite very high strength and rigidity. "We will also be promoting our wider product ranges including Module-R desks as well as our Media Wall and MediaPost video display mounts," Gary Fuller comments. "Module-R and Media Wall have proved highly successful in the broadcast market, particularly for use in master control rooms. Module-R gives customers the freedom to specify control desks from a standard range of mix-and-matchable elements without incurring the expense of tailor-made furniture. Media Wall provides similar versatility in the specification and installation of flat-screen video display panels which can be provided in practically any required size. Like all our products, Media Wall and the recently introduced standalone MediaPost incorporate reflect our careful attention to detail in aspects such as cable management."

Custom Consoles to showcase its security furniture solutions at IFSEC 2014