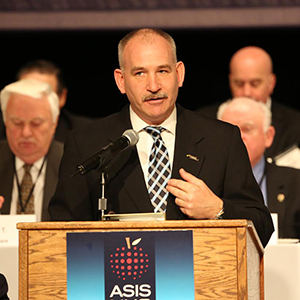 After a 30 year career with the NYPD, Mr. Anderson retired to accept a position with AlliedBarton Security Services, the largest privately owned US-based security company. In his role as a Vice President, Operations in the NYNJ Region, he oversees a portfolio of government and commercial security services accounts with annual revenue in excess of $80M, with accounts in Manhattan, the Bronx, the Hudson Valley. He is currently the lead Program Manager for the Port Authority airport account, responsible for overall service delivery for John F. Kennedy, LaGuardia and Newark Airports. Mr. Anderson holds a Bachelor of Science degree in Liberal Studies from the University of the State of New York Regents College, a Master of Science degree in Instructional Technology from New York Institute of Technology, and a Master of Arts degree in Criminal Justice from the State University of New York at Albany. He has served as an adjunct professor in the Law and Police Science Department at John Jay College of Criminal Justice, has been an affiliated faculty member of Penn State University in their Justice and Safety Institute, and has also served as a member of the Advisory Board for the School of Criminal Justice at Monroe College.

The award was presented during the New York ASIS 25th Security Conference & Expo AlliedBarton Security Services, the industry’s premier provider of highly trained security personnel, announces that George W. Anderson, Vice President of Operations, received the ASIS New York City Chapter’s Eugene J. Casey Award for Service. The award was presented at the annual Person of the Year luncheon honouring Commissioner William J. Bratton during the New York ASIS 25th Security Conference & Expo. The two awards presented at the luncheon were for Commissioner Bratton and Anderson.   Achievements “George has been a major part of the ASIS NYC Chapter’s leadership team for over eight years,” said Caress Kennedy, Vice President/General Manager, AlliedBarton. “In addition to having served as Chapter Chairman, he supports ASIS initiatives and programs for new and established members including educational and social programs for the ASIS Young Professionals. George’s service to ASIS is representative of his continuous commitment to the security industry.” Anderson is responsible for operational oversight and delivery of service to AlliedBarton clients in New York and New Jersey. He is the lead Program Manager for the Port Authority Aviation Contract, responsible for service delivery for AlliedBarton’s security program at JFK, LaGuardia and Newark Airports as well as the World Trade Center. Born and raised in New York, Anderson joined AlliedBarton in 2011, following a 30-year career in the NYPD, retiring from the Department with the rank of Assistant Chief. He is a member of the International Association of Chiefs of Police, serving as the co-chair of the Private Sector Liaison Committee. Anderson holds a Master of Science in Training and Learning Technology from the New York Institute of Technology; and a Master of Arts in Criminal Justice from the State University of New York at Albany.