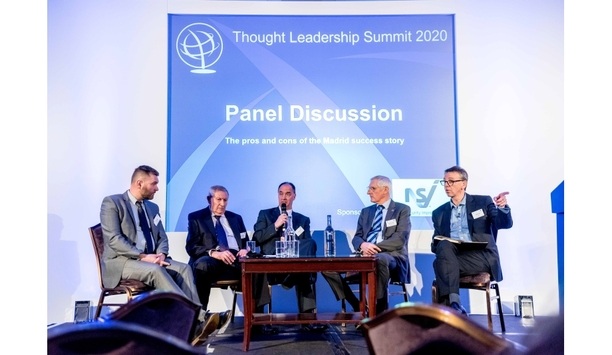 Key topics and challenges affecting the security systems and guarding sectors were addressed at this year’s NSI-sponsored Thought Leadership Summit, held at the Royal Lancaster London. Delegates from across the industry engaged with a lively, informative and thought provoking programme, organised by the Outstanding Security Performance Awards (OSPAs). A cross-section of security industry end users, service providers, sector organisations and regulatory bodies attended the third annual UK OSPAs Thought Leadership Summit, where an international line-up of speakers provided a variety of valuable insights. They included Inspector Angel Martinez Sendino from the Central Private Security Unit with Madrid Police, who described the pioneering strategy it has adopted to tackle false alarms and the resulting reductions achieved. Real Living Wage Inspector Sendino’s presentation was followed by a panel discussion about the Madrid experience and the lessons that might translate into the UK to beneficial effect. This round-table debate, involving David Mair from the Security Systems Unit at the Metropolitan Police, Ken Meanwell from Secured by Design, David Wilkinson from the BSIA, plus NSI’s Richard Jenkins, was chaired by Professor Martin Gill and prompted informed delegate feedback during a Q&A session. Meanwhile, the merits and implications of paying the Real Living Wage in the security sector were summarised by Sebastian Bachelier from the Living Wage Foundation. He explained how the voluntary Real Living Wage (as distinct from the statutory Minimum Wage for under-25s and the National Living Wage for over-25s) offers benefits to workers and employers alike, in addition to tangible economic contributions when implemented. Underrepresentation of women  The SIA welcomed NSI’s forthcoming Code of Practice for the provision of labour in the security and events sector The Summit moved on to hear from Ian Todd, Chief Executive of the Security Industry Authority. His address covered areas including the Approved Contractor Scheme and concerns surrounding the role of labour providers operating outside the ACS’ remit. This involves issues including rogue labour, inadequate screening, poor training and illegal low pay, along with the SIA’s role as a regulator in managing these concerns. The SIA welcomed NSI’s forthcoming Code of Practice (NCP 119) for the provision of labour in the security and events sector. Douglas Barnett from AXA Insurance then provided an insurer’s insight into its experience of guarding contractor practices, drivers behind the race to the bottom and future opportunities. Concluding the event, Charlotte Howell from Perpetuity Research summarised some of the main findings from a recent survey of experiences from women working in physical security and key areas for future industry development, including the significant current underrepresentation of women in the security sector. Help propel the security sector “This Thought Leadership Summit is the first to have been sponsored by NSI and our involvement with this prestigious event was prompted by our drive for continual improvement amongst security providers,” comments NSI Chief Executive Richard Jenkins. “We welcome fresh perspectives that provoke constructive debate about how the industry could develop. The Thought Leadership Summit proved a driving force in moving the debate onwards in a positive and engaging way and covering a range of challenging topics. Recognising new technology, working practices and shared standards can help propel the security sector and raise its profile with buyers, people joining the industry, and in the wider community.”

Reliance Protect initiates a Level 1 police response for highest risk situations following changes to guidelines from NPCC Improving safety for lone workers in health, social services and the public sector, Reliance Protect has been praised by police for its contribution to new emergency response guidelines. Level 1 police response As an accredited BS8484 provider, Reliance Protect will continue to bypass the traditional 999 route and initiate a Level 1 police response for the highest risk situations following changes to guidelines from the National Police Chief’s Council (NPCC), introduced in October. “By taking a leading role in the consultation process with the NPCC, we are ensuring that our Reliance Protect lone worker service remains at the forefront of the industry with our 24/7 monitoring centre staff fully prepared to adopt the changes quickly,” says Terry Sallas, MD of Reliance High Tech. The more carefully targeted approach adopted by the NPCC will ensure that emergency police resources are prioritised more effectively and frontline staff deployed more efficiently, wherever the need is greatest and most urgent. Kenneth Meanwell, Security Systems Group Staff Officer of the National Police Chief’s Council said: “We warmly welcome the approach that Reliance Protect has taken in working alongside the police to help shape and introduce the new guidelines, and implement these improvements quickly.” Enhanced personal protection for lone workers Reliance Protect provides immediate support in the event of a threat and is now deployed to safeguard more than 25,000 lone workers in the NHS and public sector with an average of 1,500 new users signing up each month. Enhanced personal protection includes expert security support and two-way audio contact when employees are exposed to heightened risk while at work. Reliance Protect is the UK’s most regulated and compliant solution. BS8484 accreditation ensures its devices, monitoring and alarm response capability are fit for purpose enabling alarms to be escalated to regional police services, bypassing the 999 route, to generate police response. BS5979 Category II is critical for any organisation looking to safeguard workers as it is the highest industry standard for alarm monitoring centres. In addition, ISO27001 accreditation ensures that all customer and staff data is securely managed and stored within systems designed to the highest standards.