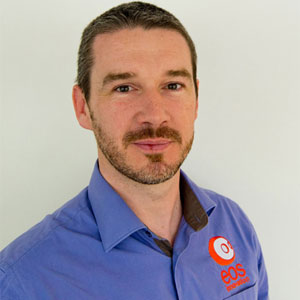 The implementation of security robots does not act as a replacement for human workers or lead to job cuts Flourishing and rapidly evolving, the security industry is well suited to adopting new technologies. Companies are increasingly active in looking for advanced methods to protect their high-value goods. To meet this demand, all kinds of innovations have been developed to overcome existing limitations and thereby optimise the work of security professionals. Surveillance cameras are becoming more and more sophisticated, using movement and heat detection technologies, while drones and robots have also emerged, designed to assist security workers. A lot of effort and ingenuity is going towards the challenge of creating new solutions to improve risk prevention. A vital tool for enhanced security Contrary to popular belief, the implementation of security robots does not act as a replacement for human workers or lead to job cuts. Rather, robots complement the work of on-site or remote security agents, optimising the decision-making process which remains firmly in human control. Any abnormal situation detected by a robot can be communicated immediately to a remote operator who can analyse potential incidents in real time. Combined with the precision and reliability of information transmitted by the robot, this ensures a quick and appropriate response. The role of the security professional therefore remains vital in optimising site security. Meanwhile, the use of a robot covers tasks which can be repetitive and monotonous for a human, or sometimes dangerous, such as a physical intrusion. e-vigilante: a unique solution for optimising on-site security The e-vigilante mobile surveillance robot was developed by EOS Innovation as a solution to meet the needs of professionals in the security industry, reducing security risks and associated costs. e-vigilante operates autonomously, following pre-programmed or random patrol routes in warehouses and industrial sites. When an anomaly is detected, e-vigilante alerts the remote operator, transmitting real-time audio and video data which can be easily accessed via a user-friendly interface. The operator can take control of the robot to verify the threat and use dissuasive functions to interact with any intruder. Alert verification is therefore much quicker than with traditional methods. The surveillance robotics sector is experiencing growth and the future looks promising. Significant financial investments have been made and we can expect to see a host of new technologies emerge in the near future. e-vigilante is a primary example – there are many opportunities and fields still to be exploited.

‘E-vigilante’ has been designed to supplement human surveillance, operating in tandem with an off-site security agent EOS Innovation, an award-winning European start-up that specialises in the design and manufacture of mobile surveillance robots, recently unveiled its ‘e-vigilante’ robot at security industry trade show IFSEC International, which held from 17 to 19 June at the ExCeL convention centre, London. The ‘e-vigilante’ robot is an intelligent and autonomous mobile surveillance robot which provides frontline security to companies operating large warehouses and industrial sites, offering security cost reductions, human resources optimisation and increased reactivity. ‘E-vigilante’ has been designed to supplement human surveillance, operating in tandem with an off-site security agent, who retains control of the important decision-making process when the robot detects an alert situation or other incident. ‘e-vigilante’ can patrol randomly or follow a pre-programmed round, set up by the remote agent. Equipped with a high-resolution surveillance camera with 360° pan capability, ‘e-vigilante’ saves and transmits audio and video data in real-time whenever an incident is detected. In order to qualify the existence of a security threat, the agent takes control of the robot remotely through a user-friendly interface. An array of dissuasive tactics, such as an alarm sound, flashing lights and voice control, can be used by the agent to combat potential theft from the safety of a remote location. According to David Lemaitre, EOS Innovation CEO and Founder: “There is tremendous global potential in the security robotics market at this moment. The ‘e-vigilante’ surveillance robot provides a unique, breakthrough solution to the security industry worldwide, which will create estimated savings of 30% compared to traditional surveillance methods.” Technical specifications of e-vigilante surveillance robot: Runs up to 8km per hour 10 hours of battery life - automatic battery recharging Height: 50 cm, Width: 75 cm Weight: 50 kg Long-range laser for detecting suspicious activity High-resolution camera for transmitting real-time information directly to a remote security agent. Strong, impact-resistant shell 360-degree detection