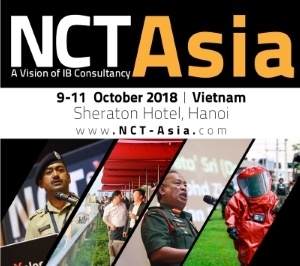 After two successful NCT nXt workshops in Hanoi in 2016 and 2017, Asia’s largest CBRN, EOD and demining conference, NCT is coming back to Vietnam! Taking place from October 9-11, 2018, NCT Asia is organised in official partnership with the Vietnamese Agency for Radiation and Nuclear Safety (VARANS).

The event will kick-start with a live multi-agency CBRNe capability demonstration by the Vietnamese People’s Army Chemical Core and the National Search and Rescue Committee and will be followed by two days of conference and exhibition. The official partnership with VARANS and the Vietnam People’s Army Military Medical Department will guarantee the presence of high ranking civil and military officials operating in the field of CBRNe.

Vietnam is one of the leading countries in the region when it comes to CBRN defense. Topics to be discussed will include radiological and nuclear response preparedness, landmine clearance, chemical industrial disaster management and CBRNe capability development in Southeast Asia.

By welcoming government delegations, leading first responders and decision makers from both the CBRNe and EOD community, NCT Asia will again be the must attend annual forum for CBRNe professionals in Asia. Speakers at the event include the Director General of VARANS, military representatives from the National Committee for Search and Rescue and the Military Medical Department as well as representatives from the Vietnam National Mine Action Center (VNMAC).