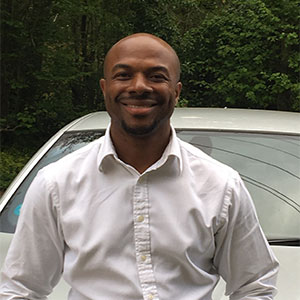 Jermaine Campbell is a specialist in data storage technologies with over 20yrs experience in the component market. He is currently focused on the surveillance market working for Seagate Technology as Surveillance Sales Lead for EMEA. It is Jermaine’s aim to broaden and deepen relationships with channel partners and with their input define and execute the Seagate surveillance strategy. Jermaine is married with 4 children and enjoys football, singing and playing music.

When a news story of global interest begins to break, reporters across the world will scramble to find CCTV footage of the event, however isolated the incident may seem. Given the average of one camera installed for every twenty-nine people on the planet, it is perhaps unsurprising how often a persistent journalist, investigator or member of the public will actually be able to uncover footage. In fact, this number is estimated to be as high as one camera for every eleven people in mature markets such as the US and the UK. Such a high number of CCTV systems in use at any one time generates a huge amount of raw data. According to a report by IHS, Inc., 566 petabytes of data were produced in just one day by all new video surveillance cameras installed worldwide in 2015. Growing demand for modern surveillance systems As the demand for CCTV systems grows, customers will continue to ask for the ‘best in class’ features that they are most familiar with, such as cameras and surveillance software. However, they may not have thought about the less tangible – but equally important – factor of how the data captured is being stored. In fact, rather than being designed for continuous capture of HD or FHD video from multiple cameras, many systems are still using non-surveillance class drives which are not specifically tested for the unique demands of modern CCTV systems. A drive optimised for surveillance systems should be able to handle the required workload to help reduce the risk of errors and dropping frames. Optimised drives for video surveillance An optimised drive should consume low amounts of power, in turn generating less heat and be less likely to fail. Overheating will adversely affect the read and write operations in a surveillance system and will also reduce the life of a drive. While a drive designed for surveillance systems may cost more upfront, they could benefit your business with enhanced performance and reliability. The right surveillance storage solution will offer high performance, efficiency and capacity that has been designed for harsh surveillance environments An average desktop class drive will have power requirements of between 6 to 8 watts whilst a surveillance drive, such as the WD Purple Surveillance hard drive, will operate at between 3 and 5 watts. The right surveillance storage solution will offer high performance, efficiency and capacity that has been designed for harsh surveillance environments. But how to tell the difference? Features of surveillance storage drives There are several specific things to look for when evaluating whether a drive has been designed with surveillance in mind:  Always on: A surveillance system often works 24x7. The drive should be designed and tested for high write cycles. A desktop drive is typically designed to be active for eight hours a day during the working week whereas a surveillance drive is designed for 24x7 usage. Performance Reliability: Some drives, like WD’s Purple surveillance-class hard drive family, include special technology (called AllFrame 4K™ Technology in this case) that helps improve playback performance and can help to reduce errors and frame loss. RAID-enabled: To increase peace of mind for your customer, you may also want to look for a drive with RAID. A system with this capability can use two or more hard disks to create redundancy for a failed drive by ensuring that the recording is still being captured even if one drives is not working. This lessens interruptions in productivity and decreases the chance of data loss. Low power consumption: While “low power consumption” might not be first on your list of things to look for in a hard drive, the need for always-on capability makes this crucial. Some drives are designed with low power consumption in mind, resulting in greater reliability and friendlier to your customer’s wallet. High camera count support: An NVR system is designed to be scalable with a high number of IP cameras and therefore will probably require higher storage use. 4K video is much larger than the size of standard definition, which significantly increases the workload and puts more data on the disk per second. Surveillance drives are available up to 10TB to deal with longer retention and higher workloads. High system bay count support: As you add multiple hard drives to a system there will be an increase in vibration in the chassis, this is inevitable due to the nature of spinning disks. The right drive will include technology to counter system induced vibration which helps maintain drive performance. Extensive system compatibility: There are differences in internal chassis design, and software which can create issues from physically fitting the drive into a bay to seeing its full capacity. Look for drives that are compatible with the DVR and NVR manufacturer you are using. Considering the importance of storage in surveillance systems, you may also find it helpful to use a capacity calculator and to help find the right drive and capacity that best suits your needs. As the number of surveillance cameras continues to increase, so will the complexity of the CCTV systems. Installers need to ensure they are fully aware of the different options available and that they are advising on the very best support to ensure their customers are getting the reliability, cost and performance they demand.

Award reflects company’s position as leading ‘Industry Educator’ for  use of WD Purple hard drives Professional trade only CCTV security products distributor, COP Security, has been awarded a prestigious ‘Partnership Award’ by digital information storage manufacturer, Western Digital (WD). The award was presented during the recent IFSEC 2015 exhibition in London and reflects COP Security’s position as a leading ‘Industry Educator’ for the application and use of WD Purple hard drives. To secure greater performance and reliability, all COP Security digital recording solutions employ WD hard drives. Typically, most other DVR manufacturers employ desk-top hard drives that are designed for IT data storage application and to run for only short intervals, and not for the high demand of the ‘always-on’, high-definition surveillance video storage environment. However, WD Purple hard drives are purpose-built for mainstream video-surveillance applications, being designed specifically for the rigorous of video-surveillance applications, where the drive can typically spend more than 95 percent of its time in ‘write’ mode. Long-term technical partnership between the two companies Jermaine Campbell of Western Digital presented the award to Donna Butterworth on behalf of the COP Security team. Reflecting the long-term technical partnership between the two companies, Jermaine said: “WD Purple hard drives represent progressive technology and are at the forefront of reliability. The WD team is continually encouraged by the enthusiasm and commitment of COP Security for their use and recommendation of WD Purple hard drives to its customer base. I firmly believe that our technical partnership and support will assist product performance and the sales growth of COP Security for many years to come.” Gareth Rhodes, Sales & Marketing Manager commented: “WD products have significantly strengthened our recording solutions product range, whilst our long-standing continued relationship with WD illustrates how organisations can work together to ensure installers and end-users receive the best possible product. We look forward to a bright future and continued success with the support of WD.”