Jason Chaikin is the President at VKANSEE. 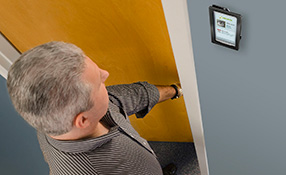 A biometrics-embedded tablet can tag a guard upon entering the building & feed videoof what’s happening beyond secure doors as he/she moves through the facility The best way to make the case for biometrics is to consider a physical and logical access control scenario, according to biometrics vendor SRI Identity, a program from SRI International, one biometrics company. With advances in security technology, access control systems have come to play a bigger role in organisational efficiency and strategies. Expanding role of access control systems Imagine an employee sitting at their desk after entering a facility. The organisation can tailor access and information to that employee across all devices and interfaces (access points, laptops, tablets, smartphones) in a way that not only improves security, but also enables the organisation to track time and attendance, manage inventory control, and, in effect, to integrate biometrics into a broader operational system. SRI Identity's (IOM) solutions offer an efficient, fast and non-invasive method of controlling physical and logical access, says Steve Perna, Executive Director, Products and Solutions Division, SRI International.  “Enterprises can maintain high security without slowing things down,” he says. Consider the efficiency and productivity gains for a workforce with the use of biometrics. In hourly and shift-based businesses such as retail, hospitality and manufacturing, time and attendance becomes more accurate (no more “buddy punching”) and automated. It also becomes more convenient, eliminating all the extra steps between punching in, recording hours, processing payroll and performing analytics. SRI Identity technology The ability to push information out to the edge based on the individual’s access level, location and other factors is a powerful capability, says Perna. A biometrics-embedded tablet could, for example, tag a guard upon entering the building, and feed video of what’s happening beyond secure doors as he/she moves through the facility to better situational awareness. SRI’s recently launched a biometrics-embedded tablet – equipped with its (IOM) technology – combines the accuracy and convenience of iris biometrics with the functionality and customisation of the Android enterprise computing platform. This enables one device to support workflows including physical access control, time and attendance, inventory control, company messaging as well as addition customisable applications. Today, biometrics are seeing heavy use in mobile devices as well as banking applications, says Robert Fee, Director of sales, access control, Zwipe. Applications have seen the greatest uptick in replacement of passwords and log-ins, specifically in web and mobile based applications. Biometrics, as a form of security, has the potential to replace current forms of security, including physical, logical and web, he says. Therefore, considering the number of physical keys, access cards and credit/debit cards currently in the marketplace, the potential is excessively large. The primary value proposition of using biometrics over traditional security is that itdramatically enhances security by providing two-factor biometric authentication Enhanced security with biometric solutions Fee says the primary value proposition of using biometrics over traditional security (in the case of access control) is that it dramatically enhances security by providing two-factor biometric authentication: your fingerprint. The days of using a PIN for two-factor are gone since PINs can be passed on from employee to employee to non-employee. “The vast majority of electronic access control (EAC) systems in place today authenticate the badge, not the person holding the badge,” says Fee. “Where is the security in that?” Solutions such as Zwipe biometric credentials allow implementation of two-factor authentication without replacing a single reader. No database integration, protection, installation, wiring or maintenance agreements required. It provides more security without any additional steps. Taking the same amount of time to use a biometric product as a traditional PIN-based card or swipe card, a biometric solution will offer greater security and ease of use, according to Zwipe. Zwipe specifically addresses privacy concerns by never storing a person’s fingerprint. The company creates unique templates that, by themselves, have no value other than within a Zwipe-based solution. Plus, the biometric engine within a Zwipe device is independent of the RF transponder that communicates to an external device, such as a physical or logical access reader. There is no biometric data being communicated between a Zwipe device and reader. Zwipe is the biometric reader. Entering physical access control market “We have physical spaces and virtual spaces, and the differences between them are becoming fuzzy,” says Jason Chaikin, President of biometric company Vkansee, which specialises in fingerprint capture for payment, data and other sectors, including physical access control. He notes that biometrics might be used to control an entrance to a building as well as entry into a network on a computer in the building. Additional safeguards can include confirming that a person trying to access a network from a computer in the building is also on record as having entered the building. “It brings together silos of information so we don’t have the weak links we have now,” he says. Chaikin says physical security devices are on his company’s radar. “I think biometrics should be on a lot more doors than they are now. Our new smaller size sensors can add biometrics for an extra $20 or so per door. The ability to locate the sensor safely under glass opens the doors to outdoor applications in a variety of harsh environments.” “People are willing to give a new look to biometrics, but the physical access control market is more conservative, so it will take more time,” says Chaikin. “When you contact companies, they are willing to give it a shot. Agile companies will start adopting new biometrics that work quite well – you will see a quick rampup.” 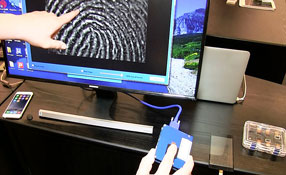 More fingerprint scanners being embedded into mid-range smart phones willspur the growth in availability of mobile wallets When Apple included a fingerprint scanner on the iPhone, everything changed in the biometrics market. What used to be exotic or even dubious instead became normal and everyday. Any negative connotations about biometrics were wiped away in an instant. “Since the release of Apple’s Touch ID, and subsequent similar products from Samsung and other mobile device manufacturers, we have not seen any negativity; the opposite in fact,” says Robert Fee, Director of Sales, Access Control, Zwipe, whose access product is essentially a small, portable biometric scanner that can fit in your pocket. Mobile payment services driving biometrics adoption Pushing growth in biometrics adoption across all markets is greater adoption of biometric payment services such as Apply Pay and Samsung. A study from Juniper Research, Hampshire, U.K., finds that increased rollout of contactless payment services using fingerprint scanners will push the number of biometrically authenticated transactions to nearly 5 billion by 2019, up from less than 130 million in 2015. At present, there are only two services that use fingerprint scanners for authentication – Apple Pay in the U.S. and U.K. and Samsung in the U.S. and South Korea. However, both services are expected to be launched in several additional markets in 2016, and the convenience of the scanner is likely to make it a primary mechanism for transaction authentication. More fingerprint scanners in mid-range smart phones will spur growth in availability of mobile wallets. Also contributing will be a growing acceptance of contactless infrastructure at the point of sale (POS). Need for biometric data security & user privacy Juniper Research also commented on the need for security of biometric data. “When a password or PIN is hacked, the consumer can simply get a replacement,” says Dr. Windsor Holden, research author of the Juniper Research report. “When biometric data – fingerprint, iris, facial – is stolen, the consumer’s online identity could be irretrievably compromised.” The number of biometrically authenticated transactions will push to nearly 5 billion by 2019, up from less than 130 million in 2015 Biometrics has been ready for “prime time” for five years or more, says Jason Chaikin, President of biometric company Vkansee, which specialises in fingerprint capture for payment, data and other sectors, including physical access control. Apple’s incorporation of biometrics on the iPhone has created a real-life use case and a resulting “buzz” that will open the door to many other biometrics uses, he says. Privacy has been a key point both driving and inhibiting biometrics, he adds. “The issue with privacy is that you are only as strong as your weakest link,” says Chaikin, and security must extend to the every step of the process, from how the biometric is captured to how biometrics are stored and transferred, requiring encryption at every stage. Vkansee miniature optical fingerprint sensor Vkansee has developed a new sensor that could be used on a smart phone or any number of other devices. The smaller 2-millimetre optical fingerprint sensor, in effect, takes a photo of the finger for more accurate and reliable fingerprint authentication. Previously, optical fingerprint sensors such as those used by governments and civil authorities worldwide, have been larger – about 2x2 inches – too big to be used in embedded devices, for example. By miniaturising the familiar technology, Vkansee is paving the way for its greater use in smart phones, computers, tablets, automobiles, and physical access control. The small module can be mounted under a device’s glass screen so it’s not as susceptible to environmental elements. Currently the product is on the third run of pre-production samples; it will go into full production in 2016. In contrast, the capacitive sensors currently embedded in mobile phones and other devices emit a small amount of electricity and then measure how much of it is returned to the sensor – more from ridges in a fingerprint than from valleys – to build a map of the fingerprint. Users must touch the sensor directly. Manufacturers of sensors installed in today’s mobile devices include Fingerprint Cards AB (FPC), Sweden, and Synaptics, Santa Clara, California. Chaikin contends semi-conductor-based technology has reached its limit in terms of resolution, thus the need for an optical sensor that can be embedded in a device.  (see bigger image)Vkansee created a fingerprint optical sensor to address the limits met bysemi-conductor-based technology in terms of resolution Vkansee’s new, miniaturised optical sensors are priced comparable to capacitive scanners, and have 2,000 pixel per inch resolution to capture “Level 3 details,” such as sweat pores and the shapes of fingerprint ridges. A byproduct of the greater resolution is to make it more difficult to fool the reader with a molded fake fingerprint. Beginning in 2016, smart phone and other device companies – including electronic access control companies – will be evaluating the Vkansee sensor with an eye toward embedding it into a variety of devices. “As the size of sensor gets smaller, it becomes important to be able to see deeply in the finger to get an accurate identification even on a small sensor,” says Chaikin. Speed, accuracy and convenience SRI International’s latest generation of biometrics products is following the trajectory of the evolution of mobile phones from a single-purpose device to today’s multi-function smart phone. “Just as we now expect smartphones to do a lot more than support voice calling, our offerings are using the speed, accuracy and convenience of biometrics to converge security and operations for enterprise workflows,” says Steve Perna, Executive Director, Products and Solutions Division, SRI International.  “In years past, both customers and installers of biometrics were disappointed with the broken promises of what biometric technology could deliver,” says Larry Reed, CEO, ZKAccess. “Yes, today’s sales of biometrics are hampered.” But he adds that biometrics is making a big comeback. Driving the trend is the proliferation of smart phones with built-in finger readers (and soon-to-be face readers), improvements in biometric technology, reduction in the cost of biometrics.