Iain Entwistle is the Product Marketing Manager at Meesons A.I. Ltd. Having completed his Bachelors Degree from Sheffield Hallam University, he has over 15 years of experience in the field of marketing. In the past he has been associated with Astracast. 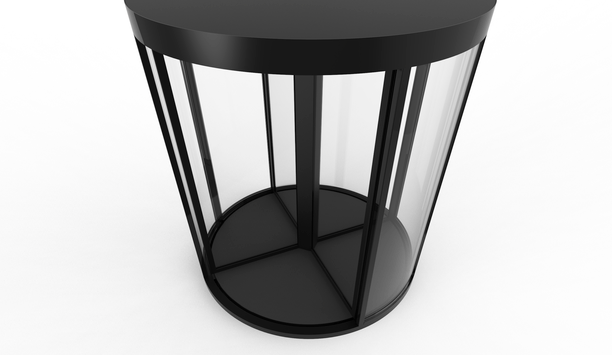 Meesons, the provider of anti-tailgating entrance control solutions, introduces Rev 190, the world’s first revolving door to achieve certification to Loss Prevention Standard (LPS) 1175: Issue 8 up to C5 (SR3). By introducing the world’s first LPS 1175 approved Revolving Door, Meesons has raised the bar in terms of security for prestigious buildings and entrance ways where retaining aesthetics is a priority. LPCB certification of the Rev 190 Revolving Door to LPS 1175 provides independent verification that it will deliver the significant levels of resistance to forced entry by hostile actors, be they burglars, terrorists or protestors. Highest standards against physical attack Meesons’ LPS 1175 Issue 8 Revolving Door is in a permanent state of attack-readiness The LPS 1175 standard reflects a broad range of threat scenarios including tool attacks by intruders acting without fear of attracting attention to their actions by using tools and entry techniques likely to generate sustained levels of noise. This is a threat that is not necessarily covered by other security standards, such as EN 1627, as explained in BRE’s Specifiers Guide to Façade Security Standards. Being independently tested to LPS 1175 in standard operation means that Meesons’ Rev 190 Security Revolving Door meets the highest standards against physical attack at all times, whilst providing specifiers with an entrance control solution that offers high architectural appeal. Meesons’ LPS 1175 Issue 8 Revolving Door is in a permanent state of attack-readiness, meaning it requires no user intervention, or secondary layer of defence, to stop criminals who are prepared to use force. Providing forced entry protection The Rev 190 Security Revolving Door is a high security, fully automatic 4-wing, bi-directional Revolving Door that remains as secure during the day is it does at night, preventing forced attack 24/7. At the same time, its sleek, stylish design creates a welcoming and non-intimidating aesthetic for legitimate building users. This makes it highly suitable for prestigious projects in the commercial, office, R&D and retail sectors. While other revolving doors may rely on a secondary barrier, such as a night shutter, to provide forced entry protection, the Rev 190 Revolving Door is a fully attack ready solution that combines functionality and forced entry protection into a single product. Robust physical security The Rev 190 Security Revolving Door addresses the need for aesthetically pleasing Meesons introduced the Rev 190 following demand from customers for a revolving door that enables a high frequency of users to transit, whilst preventing unauthorised entry. In doing so, the Rev 190 Security Revolving Door addresses the need for aesthetically pleasing, robust physical security at the entrance. Legitimate building users can present their ID card or biometric data in order to traverse Rev 190 Security Revolving Door. When specified with anti-tailgating detection the single-person authentication prevents unauthorised individuals from piggybacking their way into the facility by closely following the person in front. The Rev 190 features a range of transit modes that can be operational day/night. These allow building managers to choose between free-flow, single person authenticated access control or lock down modes, depending on their requirements. Achieving aesthetic aspirations “Our new Rev 190 Security Revolving Door is a ground-breaking addition to the revolving door sector,” said Iain Entwistle, Product Marketing Manager at Meesons. “It makes a step change in terms of security by being the first to achieve LPS 1175 Issue 8 up to C5 (SR3) and is in a permanent attack-ready state 24/7. That gives architects and security specifiers an ability to achieve their aesthetic aspirations whilst providing their client with full controllability of who is entering the facility.” Meesons has again demonstrated their willingness to listen to the needs of risk managers" Richard Flint, BRE’s Physical Security Technical and Business Development Manager, commented “Meesons has again demonstrated their willingness to listen to the needs of risk managers and their ability to develop products capable of delivering the high levels of resistance to forced entry required to achieve LPCB certification to LPS 1175.” “We expect the Rev 190 Security Revolving Door to generate high levels of interest as it is the first to be certified to LPS 1175, a standard of protection sought by a growing number of specifiers around the world wishing to mitigate the threat of forced entry into the facilities they are responsible for.” National police crime prevention Having been certified by LPCB to LPS 1175, the Rev 190 is compliant with the design of secure doorsets as set out in The Building Regulations Approved Document Q. This makes Rev 190 the only Revolving Door to be full complaint in accordance with Document Q. The product has also been accredited by Secured by Design (SBD) and becomes the only Revolving Door accredited by SBD. SBD is the national police crime prevention initiative for meeting its Police Preferred Specification for its robust qualities to deter and reduce crime. SBD is the only way for companies to achieve Police Preferred Specification for security-related products in the UK. The Rev 190 Revolving Door is a further addition to the extensive range of LPS 1175 certified products that are recognised by SBD, which already includes 11 Security Portal models. 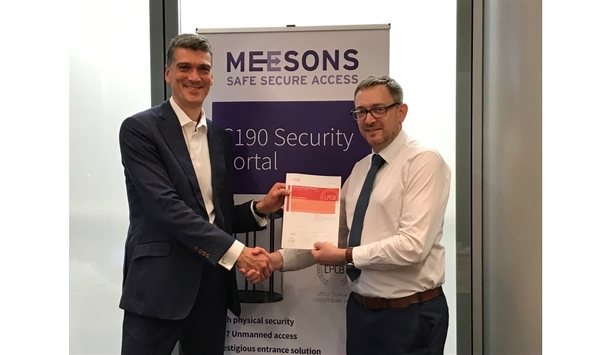 Meesons, the supplier of entrance control solutions, becomes the first to achieve LPS 1175: Issue 8 for an extended range of Security Portals. The company was previously first to achieve Loss Prevention Standard (LPS) 1175: Issue 7 for Security Portals. As well as successfully achieving Issue 8, the latest version of LPS 1175, which replaces Issue 7.3, Meesons has extended the range of fully compliant Security Portals. Deliver extended delays Issue 8 of LPS 1175 retains the same rigorous testing procedures as Issue 7 Jeremy Terry, Chief Executive Officer, was presented with the new Certificates by Richard Flint, Physical Security Technical and Business Development Manager at BRE, at the LPCB and SABRE workshop in London. Issue 8 of LPS 1175 retains the same rigorous testing procedures as Issue 7 with the additional of a number of new tests to reflect a broader spectrum of threat scenarios. Issue 8 therefore includes several important updates, including changes to reflect the scope of tools now available, size of tools, access to the tools, portability of the tools, power and effectiveness of the tools. The new ‘matrix’ style security ratings defined within the revised standard facilitates LPS 1175 being applied to a far wider scope of threat scenarios and supports the use of layer security to deliver extended delays. Single digit performance That means the previous single digit performance classification within Issue 7 (Security Ratings SR1 to 8) has been extended to form two elements that classify performance in terms of: Threat Level (letter A to H), corresponding with the tool kit used to evaluate the product’s intruder resistance and the number of attackers involved. The second element assigns a numeric value (1, 3, 5, 10, 15 and 20), corresponding with the minimum Delay (in minutes) provided by the product when placed in a locked position. Although the new standard covers 48 combinations of threat and delay it is envisaged that specifiers will achieve an extended delay by deploying a series of products in a layered approach. Meesons’ extended range of Issue 8 models includes the extra-large C190 Cylindrical Security Portal and large C3 Cylindrical Security Portal, which have now been successfully approved to LPS 1175: Issue 8 A1 (SR1), B3 (SR2) and C5 (SR3). Certified products All models provide a constant high security state without the requirement for external inputs In addition, a wider range of Meesons’ Security Portals have now achieved LPS 1175: Issue 8, including extra-large FPJ140 2HP Security Portal, the semi-circular FPJ140 1A & FPJ140 2S Security Portals and HPJ140 Half Security Portal. Extending the range of LPS 1175 certified products means that Meesons now offer three Security Portals approved to A1 (SR1), B3 (SR2) and C5 (SR3) and three approved to A1 (SR1) and B3 (SR2). All models provide a constant high security state without the requirement for external inputs. Specifiers looking for LPS 1175: Issue 8 Security Portals that are suitable for wheelchair access can choose the C190, FPJ1402S or FPJ140 2HP models. These three models ensure security is maintained during wheelchair transits with one door always being in the closed position, keeping a secure interlock and avoiding a potential free flow of users. Meeting customers expectations The FPJ models also have the ability to increase the internal depth with infill panels using 200 to 1000mm glazed or metal infills sections where required to improve user comfort and enable wheelchair or bike transits. Iain Entwistle, Product Marketing Manager at Meesons, said: “Our extended range of LPS 1175: Issue 8 Security Portals is now the widest in the UK and is supported by independent, rigorous testing, assessment and approval regimes. We are continually reviewing our range to ensure that they respond to all current threat levels, whilst meeting customers budget expectations. We currently have the largest range of LPS 1175: Issue 8 Security Portals in the market, meaning there is more choice for customers with solutions to enable wheelchair or bike access without compromising security.” Offering alternative aesthetics It a reality that a growing number of organisations around the world are faced with the growing threat of criminals" Presenting the certificate, Richard Flint congratulated Meesons for “not only being the first to accept the challenge to deliver products meeting LPS 1175; they were the first to achieve it and have gone on to develop a range comprising over 25 models offering alternative aesthetics, functionality and levels of forced entry protection”. Richard went on to explain “it is sadly a reality that a growing number of organisations around the world are faced with the growing threat of criminals and extremists willing to use more extreme methods of entry which are not addressed by standards such as PAS 24 and EN 1627. LPS 1175, which covers a far wider range of threat scenarios, provides specifiers and manufacturers with a mechanism by which to determine a product’s effectiveness in mitigating such threats; one that is supported by LPCB robust certification process. The LPCB mark provides assurances that products such as those Meesons has developed, are effective at delivering the levels of resistance to attack stated in the RedBook.” 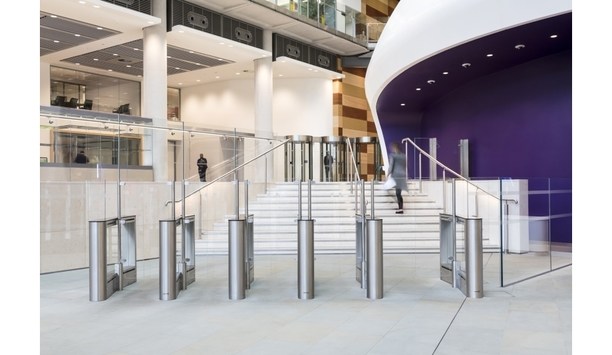 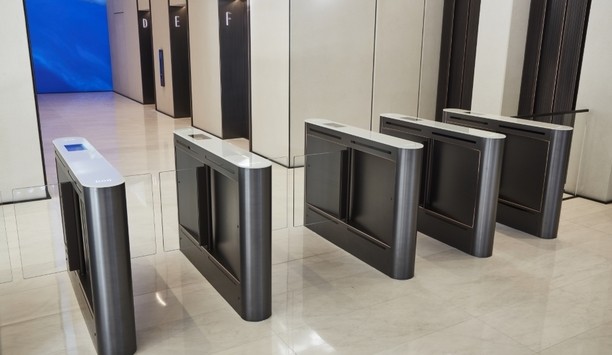