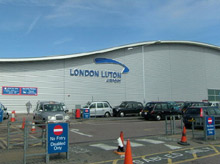 With security the number one priority for UK airport operators, technology is continuing to play a key role in meeting strict government guidelines.  A recent system upgrade at London Luton Airport by ICTS (International Consultants on Targeted Security) has demonstrated how the latest digital security solutions, including Digital Video Recorders (DVRs) from Dedicated Micros and associated NetVu ObserVer software, can be used to extend the capability of a system across multiple users to provide a more general management tool.

"Individual aircraft require the same facilities as any of the major carriers: somewhere to land, refuel and carry out maintenance work plus services such as flight plan logging and baggage handling.  Our customer provides those services for corporate aircraft ranging in size from a Learjet to an Airbus A300 at London Luton Airport."

The existing CCTV system was focused primarily on ensuring that there was no unauthorised access to restricted areas.  The original configuration worked in tandem with an access system set up at key locations for staff moving from "airside" to "landside" and vice-versa.  Security cards linked to a database displayed images of the cardholder in the security office when a card was presented to a digital reader.  CCTV cameras in the access points displayed live images to the security office for physical verification by staff.

With the company's facility increasing in size to 150,000 sq ft spread over four aircraft hangars and a workforce of 220 people dealing with 21,000 air traffic movements annually at London Luton, the CCTV system required a comprehensive overhaul to keep pace.  Working in conjunction with the Department for Transport, ICTS were asked to advise on a suitable system.

Martin comments: "The increased area to be covered by the CCTV system meant a corresponding increase in cameras and recording capacity.  We specified two of the latest DS2 digital video recorders (DVRs) from Dedicated Micros because of their inherent flexibility and ease of use."

The new system uses the existing IP network to transfer images captured on camera back to the new DVRs located in the security office.  The DVRs not only store the images for future use, but using Dedicated Micros' NetVu Connected architecture, they also transmit real-time and stored images to desktop PCs for remote viewing, meaning that the system can also be used more widely to monitor operations, as well as for security purposes.

With over 20 cameras covering the London Luton operation, images are now transmitted to any number of authorised members of staff to be viewed using Dedicated Micros NetVu ObserVer software.  This allows individual users to call up images from the DVRs and quickly select which cameras they want to view, using a familiar windows style drag and drop function.  The number of users is limited only by the system administrator and is fully password protected for additional security.

The ability to allow multiple authorised users access to CCTV images has proved to be a great help according to Martin.  "A handling controller is ultimately responsible for all the on-ground logistics and for his team to be able to pick and choose cameras to monitor specific activities has been really useful.  For example, planes are refuelled by a third party supplier and being able to locate fuel tenders in a hurry is very helpful."

He continues: "Although there are always staff on the ground, the Dedicated Micros system supports their presence and can help to monitor aircraft location, parking spaces and the status of refuelling or restocking procedures, which can be crucial to the smooth running of the 24-hour operation.

"Previously if an incident occurred and needed to be reviewed on CCTV recordings, someone would have had to stop what they were doing, physically go to the location of the DVR and potentially interrupt another member of staff to find the right piece of footage.  Now staff can call up what they require, saving time and manpower."

To coincide with the CCTV upgrade, ICTS has also incorporated a new biometric access control hand scanning system at key access points - described by ICTS as "airlocks".  In effect, these are two sets of locked doors between airside and landside.

Staff use an access card to enter the airlock but once inside must place their hand on a biometric scanner which displays the corresponding identity of the member of staff in the security office and opens the airlock.  For added security, CCTV cameras trained specifically at the airlock access point also capture the identity of staff passing through the airlock.

In addition to the facility at London Luton Airport, the company also runs a similar operation at Southampton Airport.  Although smaller and not a 24-hour set-up, experience gathered as part of the London Luton installation have helped to define the requirements of Southampton and to make the CCTV system, including DVRs from Dedicated Micros work, as both a security system and as a management tool.

For Martin, equipment reliability was key when specifying the system upgrade.  "Particularly when there are so many staff using a system, you have to be able to rely on a product that is easy to use or people will make mistakes and lose confidence in the equipment and installation," he says.

"Customers often tell us that this type of technology can be hugely complex and despite considerable capability, it's often simply too hard to use.  Dedicated Micros, however, have obviously engineered their systems to be easy to use, set up and install - that's why it was a relatively easy choice."

"For companies and individuals with private aircraft, it's imperative to know that security is as much a consideration for them as it would be for anyone travelling with a major airline.  With integrated access control and Dedicated Micros CCTV solution passengers can be certain that security remains a top priority at London Luton Airport.

Says Pauline Norstrom, Worldwide Head of Marketing at Dedicated Micros: "Given the emphasis placed on security when it comes to air travel, it is very satisfying to see our NetVu Connected systems playing a major part in both the effective management and the overall safety of international airports."