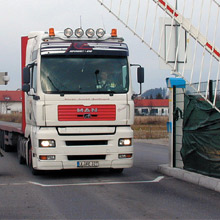 At the start of the last century, when the Fendt brothers began building their first tractors in the forge set up by their father, Johan Georg Fendt, they made a commitment to create technical solutions that would be as cost-effective as they were reliable.  In 1930, they built Europe's first small tractor, with a 6HP engine, mounted plow, and independently-driven mower.  With the Fendt ‘diesel horse', the small and medium-sized farms had their first financially viable alternative to horses.  Even in those days, the company's slogan, ‘For a head start, drive a Fendt', rang true.

Today, more than 70 years later, the company has a workforce of almost 2,600 at its Marktoberdorf, Bäumen und Kempten locations in Germany's Allgäu region and annual sales of more than EUR 1 billion.  Each year, the company builds some 11,000 tractors.  Since 1997, Fendt has been part of the worldwide AGCO group.  This has given Fendt, AGCO's leading high-tech and quality brand, access to a network of 7,350 dealers in 140 of the world's countries.

The founders' commitment to high-quality engineering has proved to be a recipe for success, and when it comes to innovation, Fendt has consistently been a nose ahead of its rivals.  The company built the first tractor with an upright radiator (1938), the first large tractor with up to 150HP (1976) and the first tractors to achieve top speeds of 40km/h (1980) and 50km/h (1993).  The company also introduced hydropneumatic cab and front axle suspension in 1993, followed by the stepless Fendt Vario transmission in 1996, a landmark in transmission design.  Today, Fendt is working on GPS systems that control the vehicle directly, using satellite navigation to ensure that the furrows plowed are exactly straight.

The company has also chosen an innovative approach in the area of access control and vehicle license plate recognition, and here Fendt uses MOBOTIX camera technology.

Up to 60 tractors a day roll off Fendt's production line in Marktoberdorf.  Because components manufactured by external suppliers are delivered just in time, between 120 and 160 trucks drive in and out of the facility every day.  "The volume of traffic used to be a serious problem for local residents, because the access route to the plant went straight through the town," recalls Klaus Kirschke, who heads Fendt/AGCO's maintenance services.  "At the end of 2003, we met the municipal authorities' wishes by moving truck access to a different location on the company campus, close to a bypass road."  This meant adding a second gate on the perimetre, but as Kirschke explains, the company wanted to avoid hiring additional gate guards if possible.

The gate guards' duties previously included letting trucks in and out of the campus and keeping a record of which trucks were on site.  "What we needed instead was an automatic solution," says Kirschke, "that would record license plates and permit vehicles that we had already registered to drive onto the campus, whereas unfamiliar vehicles would go through a brief registration procedure before being granted access."

Scatel AG, a company specialising in network services, including network infrastructure, LAN and WAN technology, radio relay, centralised management and security solutions, was contracted to install the entire automation solution.  Says Anton Huber, Scaltel's project supervisor, "We needed a subsystem based on an IP camera and special software to deliver images and to handle license plate recognition.  In my view it was important to use a MOBOTIX camera in the system, because I knew their technology delivered optimum image quality."

However, the systems supplier initially picked by Scaltel, although able to provide the requisite technology, was unable to supply reliable software.  "So I began hunting the Web for alternative suppliers offering systems based on MOBOTIX cameras," explains Huber.  The outcome was that Axxteq, specialists in vehicle access control systems, were awarded the contract, but had just two weeks in which to implement a fully functioning solution on site. 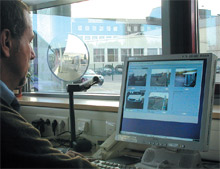 Axxteq's XPARQ access control system, which even recognises foreign license plates accurately, integrates easily with existing IT and network environments without the need for software customisation.  This was also the case at Fendt, where the project was successfully completed on schedule.

But even the best recognition software is only as good as the image input, and image quality plays a critical role in successful license plate recognition.  "That's why we prefer to use MOBOTIX cameras, because they deliver good images and, with their IP-based technology, are exceptionally easy to incorporate into existing network infrastructures," explains Dr. Andreas Scholz, Axxteq's CEO.  "Even in difficult lighting - with backlight, vehicle headlight glare and reflections - MOBOTIX cameras produce images with sufficient contrast to read license plates in almost any condition."  The excellent sharpness of the telephoto lenses and the high resolution of the new megapixel cameras are two more points that score heavily in their favour.  "All this," says Scholz, "adds up to brilliant images and good recognition results."

Three MOBOTIX cameras are currently in operation at Fendt - one for each campus entry and exit point, and another covering a turnstile used by the employees.  The cameras are set up so that the gate guards at the main entrance 450 metres away can see the whole of the front of a truck and its driver, yet still read the truck's license plates.  The images are saved, providing important documentation in the event of any irregularities.

So what typically happens when a truck drives up?  "The truck drives onto an induction loop, the camera takes a picture and the software checks the license plate to see whether the truck has already been registered with us.  If it has, the gate opens automatically," 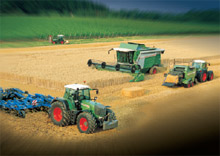 explains Klaus Kirschke.  "If it is an unfamiliar vehicle, a gate guard contacts the driver over an intercom, quickly records the truck's data in our system and then grants access.  All vehicles registered in this way are automatically able to leave the campus again, and the software records their departure."

Kirschke is thoroughly satisfied with the system.  "It gives us an exceptionally clear picture of which vehicles are currently on site, we can monitor and control access easily and we haven't had to hire additional personnel."