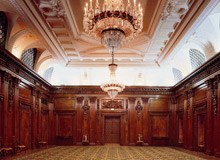 Presented with the challenge of installing and adapting security systems to keep pace with the sustained business growth of Rathbone Brothers Plc (Rathbones), one of the UK's leading providers of investment and wealth management services, security expert Raysil has chosen to rely exclusively on equipment from Siemens Building Technologies Security Products.

The most recent phase of Raysil's ongoing work for Rathbones was the completion of a contract for entry control systems at the organisation's offices in Liverpool.  This innovative system uses Bewator Cotag hands-free tag readers throughout, and is linked to the headquarters in London via a high-speed network connection.

Raysil initially became involved with Rathbones in 2002, when it took on the maintenance of security installations in Rathbones' offices at 159 New Bond Street.  Based on access control products from Bewator, this installation initially covered just three floors of the building.

The first stage of expansion saw the addition of access control for two further floors, as well as six extra doors in the main and stairwell entrances.  Subsequently, Rathbones occupied additional offices at 161 New Bond Street, two doors away from its main office.  Raysil took advantage of the flexibility offered by the SBT equipment to extend security coverage to the new premises.

At this stage, the installations in the old and new offices were linked via a modem, an arrangement that eliminated the need to install costly dedicated cabling.

Before long, in response to further growth, Rathbones decided to refurbish its premises at New Bond Street throughout.  Raysil was, therefore, invited to submit proposals for updating the security installation, with key requirements for the new system including flexibility and ease of use.

The installation proposed was based on the versatile Bewator Granta system, which can handle up to 4,096 doors and which, with Granta 5 security management software, fully supports multi-site operation.  Raysil recommended tag readers from the Cotag range for use in the installation.

"We fitted Bewator HF100 reading heads to several of the existing doors," said Pete Stewart, Managing Director at Raysil, "and the managers at Rathbones were extremely impressed with the hands-free operation these offer.  The heads have a reading range of up to one metre, which makes them very convenient to use.  They were, therefore chosen for use throughout the new installation."

As part of the work carried out in London, Raysil completely re-cabled the premises and also relocated the controllers for the access control system from a kitchen area to a more convenient area near the lift risers, where they would be better placed to accommodate future expansion.

The lifts themselves were fitted with Cotag readers and were fully integrated into the security installation on a time-controlled basis.  This means, for example, that access to the second floor is unrestricted during normal working hours, but that access to all other floors is controlled.

While carrying out the work in London, Raysil also took the opportunity to upgrade the link between the two buildings in New Bond Street.  This now makes use of spare capacity on Rathbones' corporate LAN to provide a dependable high-speed connection.

"The big challenges in London were to cause the minimum of disruption to the everyday business of our client, and to maintain effective security while the work was being carried out," said Pete Stewart.  "However, with careful planning, complemented by the problem-free installation and commissioning of the Bewator equipment, we were able to meet these challenges with little difficulty."

Following the work in London, Raysil was invited to tender for security installations at Rathbones' subsidiary offices in Liverpool.  This already had an anti-passback system with 14 access points, but further doors needed to be added and Rathbones also wished to integrate the Liverpool and London systems so that staff travelling between the two locations would only need one access tag.

As in London, Raysil put forward proposals - which were accepted - for a system based on Granta and Cotag readers.  In Liverpool, however, there was one additional complication - the Rathbones offices are in the Port of Liverpool Building, which is Grade I listed.  All fittings, including the tag reader installations, therefore had to conform to strict requirements regarding appearance.

To meet these requirements, special transom bars in polished brass to match the existing door furniture were used, and these were complemented by brass exit switches.

Once again, Rathbones' own private network was used to link the security installations in London and Liverpool.  All administration is normally carried out from London, but a secondary control centre is provided in Liverpool and this can take over all administrative functions for both Liverpool and London should this ever prove necessary.

As in London, Raysil carefully planned the installation of the new equipment in Liverpool so as to minimise disruption and inconvenience.  In particular, all of the controllers were fully commissioned and the communications link to London was set up and tested before the doors were activated, thereby keeping downtime to an absolute minimum.

"Rathbones is so pleased with the new installations that it has just awarded us a contract to look after CCTV and intruder detection," said Pete Stewart.  "And we're very pleased with the Bewator equipment.  It was good to install and configure and the support we had from Bewator was outstanding."

Rainbow play their part in Sweden