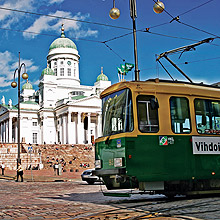 To persuade people to leave their gas guzzling cars at home, Helsinki City Transport makes every effort to create an environment in which passengers feel safe and secure.  Known locally by its Finnish acronym, HKL, the city-owned transit authority relies on March NetworksTM Mobile DVRs (MDVRs) to deter crime and vandalism on its streetcar fleet.

"We were one of the worst cities in Europe.  Now we're the cleanest," he boasts.

When HKL began considering video surveillance for the safety and security of passengers and employees, Haantie realised it would also be an effective way to combat graffiti and offered to help cover the cost of the systems.

A Web search for a DVR compliant with the IP-65 standard for protection against vibration, shock, dust, water and electromagnetic interference brought the March Networks 5308 MDVR to the attention of security systems integrator Tele-Projekti Oy.

Helsinki is ranked as the fourth coldest capital city in the world with temperatures ranging from 25º or 30ºC (77º to 86º F) in summer to -25ºC (-13º F) in winter.  Heavy snowfall, constant vibration and extreme temperatures demand a system engineered for a harsh environment.

Several MDVRs were evaluated, but March Networks technology was deemed to be the best fit for the Finnish capital's requirements.  HKL began rolling out March Networks MDVRs to its fleet of 131 trams in September of 2005 and completed a second phase of the deployment this year.  The MDVRs record video from up to eight cameras spaced throughout the articulated, two-wagon vehicles.

When cleaning staff come across evidence of fresh graffiti or windows damaged by vandals using sharp instruments, security staff pull the removable hard-drive, search for evidence and provide video clips to police.  Nine times out of 10, the culprit is one of the hard-core regulars known to the authorities.

"We know almost all of them," says Haantie.  "When we started getting tough on graffiti, the artists and the kids stopped and, now only the hard-core is left." 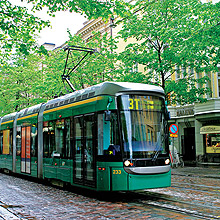 With a video surveillance system able to identify them and prison terms of up to two years, vandalism has decreased dramatically.  The savings in cleaning costs alone, says Haantie, add up to €200,000 per year.

The systems have also been used successfully in investigations of several incidents in which drivers were robbed.  Signage informing the public of video recording also helps with deterrence.

For the average commuter in Helsinki, video surveillance means a cleaner, safer and more pleasant way to get to and from work.  For HKL and the city, it translates into increased usage of public transport, less traffic in the downtown core and cleaner air.

The combined network accounts for 750,000 trips per weekday, or more than 220 million trips per year.

Kimmo Luoto, the managing director of security systems integrator Tele-Projekti Oy, says there are plans for a wireless LAN that would allow security staff to schedule automatic downloads of video in the evening when the trams return to the service depot.

"Maintenance and software updates will also be much easier with wireless," says Luoto.  Two March Networks MDVRs have also been installed in HKL's subway system to enhance safety and security for passengers and staff.

Additional deployments will likely follow as budgets are allocated and the systems demonstrate their effectiveness and reliability.

"So far," said Luoto, "the March Networks MDVRs have performed flawlessly. We haven't had any serious problems, which is impressive considering the extreme environment."

HKL's success with video surveillance is matched by its leadership in technology generally.  The transit authority, for example, allows passengers to buy tickets by using text messaging on their cell phones.

Other technology it has pioneered includes a traffic signal integration to give priority to trams and a smart card system that automatically adjusts seats and mirrors to each driver's individual preferences.

The authority estimates that it accounts for 70 per cent of all rush hour trips into the city's central business district.