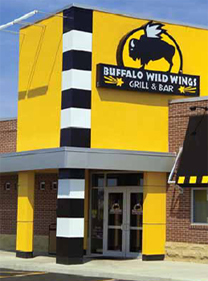 Smothered in one of 14 signature sauces from Asian Zing to Mango Habanero, and served up "Smilin', Sizzlin' or Screamin'," Buffalo Wild Wings are a popular American treat.  Meaty, tender and packed with flavour, they are a specialty of the house at 400 Buffalo Wild Wings Grill and Bar restaurants across the U.S.

For franchisees, wings and profits are one and the same, so making sure they don't fly out the back door makes good business sense.

"We received bids from several other suppliers, but we liked the March Networks system best because of its network performance and ease of use," says Jones.

"We were also impressed right out of the gate when Lindell Gray, of Alarm 24, pulled out his PDA and showed us live video from one of his customers' sites."

Jones began installing March Networks 4000 Series DVRs when he opened his third location in 2003.  He now has seven restaurants and four more on the drawing board.

From his head office location in St. Louis, he can access live or archived video from cameras located at entrances and exits, cash registers, and in kitchens and dining rooms at every location.

"Each system has already paid for itself," says Jones.  "We've had some theft issues that we've been able to resolve using video evidence and we've also had some insurance claims, so it has been extremely useful."

"It's mostly employees eating food on the line without ringing it up, or cases of something going out the back door.  These are the kind of incidents that we have been able to capture on video."

Jones and his senior managers are also equipped with remote access capability, allowing them to access video on their laptops from just about anywhere.

Some employees have mixed emotions about video recording in the workplace, equating it with "Big Brother" looking over their shoulders, but "we tell them that if they're not doing anything wrong, they have nothing to fear," says Jones.

Employees caught stealing are generally confronted with video evidence and invariably own up to the misdeed.  "They can actually see themselves doing it, so it's hard to deny or explain away."

Restaurant managers can also use the system to keep an eye on the business when they're working in their office.  If there's an issue that requires their attention, they can act on it immediately.

The DVRs in each location are also set up to record both audio and video in managers' offices as a safeguard against unfounded allegations of harassment or abuse.

"Closed door meetings to terminate or discipline staff can sometimes spiral out of control and land an employer or manager in hot water," says Gray, president of Alarm 24.  "If an accusation is ever made, having an audio and video record of the meeting can prevent a lot of grief." 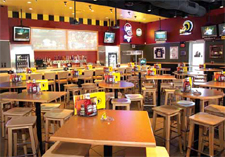 The March Networks 4310 DVRs deployed by Buffalo Wild Wings in St. Louis support 16 cameras and feature a Linux operating system in flash memory, dual 300 GB hard drives, and a docking station architecture that allows technicians to service or upgrade a unit without having to disconnect the cabling.

Set to record on motion detection, the DVRs store between 40 and 50 days of video.

"I'm very happy with the investment we have made in this technology," says Jones.  "We've been able to use video evidence to our benefit on at least a dozen occasions in the last two years."

HBoS. Banking on Security with IDL