The Pope does it. The Democratic and Republican National Conventions do it. Leading universities and police departments do it. Just what does this diverse list of people and organisations have in common? They have all used high-security portable barriers at their events with good success. According to manufacturer Delta Scientific, Palmdale, California, portable barriers may be an emerging product category for systems integrators who want to provide a total security approach for their customers.

Dealers who are not selling traffic access control systems may be leaving money on the table, especially those involved in municipal surveillance, critical infrastructure and other high-security integrations and deployments. For those integrators, portable and mobile crash barriers may be a way to increase the range of their specifications, differentiate their companies, and offer a well-rounded, total solution deployment, says Greg Hamm, Vice President of Sales and Marketing, Delta Scientific Corp.

“The crash-rated barriers and traffic access control systems are extremely versatile and are not permanent to a single location,” says Hamm. Dealers can purchase the portable security barriers and lease or rent them to customers. Delta Scientific also has seen some arrangements in which dealers rent them out for special events as they see fit. In addition, dealers can take advantage of a lease option from Delta Scientific to make it easier to buy the units and add them to their product specifications.

“They are perfect for a wide variety of public events and high-security deployments,” Hamm continues. “Dealers can incorporate them into their projects and add value to their portfolio. The product has a lot of uses, potential customers and vertical markets.”

Hamm said the portable barriers, like the totally self-contained MP5000 used for the Pope’s visit, can be placed in a minimum amount of time, about 10 to 15 minutes. No excavation or sub-surface preparation is required, so the portable barriers can be rapidly set up on existing concrete or asphalt roads, level compacted soils and other hard surfaces. Since the unfilled buttresses, or pods, weigh less than 700 pounds, they and the other modular sections are easily moved with a small forklift, pallet jack or handcart.

These types of barricades are well suited to address a specific threat or secure particular areas of a facility during special events, high-profile dignitary gatherings, or other occasions where crowds and vehicles may need to be contained or separated and especially in areas with no foundation or electrical hook-up.

The MP5000 was initially built at the request of U.S. Federal government force protection specialists for initial fast deployment use in Iraq and elsewhere. It unfolds and places itself by using hydraulics to raise and lower off its wheels. The MP5000 is a K4-rated barricade, which dictates the weight it can stop in addition to at what moving speed.

The first commercial version of the MP5000, the DSC1000, uses the company’s “Soft Stop” technology and has passed an ASTM crash test in which it stopped a 5,000-pound vehicle going 40 mph. 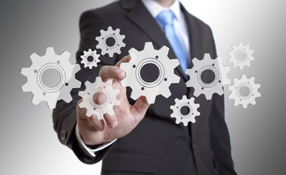 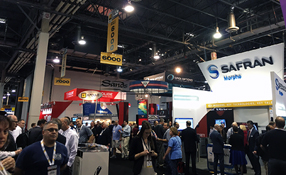