Expanding into other countries with sales offices, manufacturing facilities and distribution centres can present a number of security risks.

A member of the ASIS International Leadership and Management Practices Council, Engel is the author of “Global Security Strategic Planning,” an ASIS publication.

Suppose a corporation’s plans call for opening a small business office start-up leading to an expansion into manufacturing over three years in the Middle East.

Engel recommends beginning the process of building a security strategy and system with a security assessment using a SWOT analysis. SWOT evaluates a company’s Strengths, Weaknesses, Opportunities and Threats (SWOT) in connection with a project.

The security department can then combine the findings of the SWOT analysis with the organisation’s specific plans to plan security personnel and security technology requirements.

The risks related to opening a small office in the Middle East may include political instability, terrorism, unreliable infrastructure, difficulties protecting the supply chain and other problems.

Such risks may call for robust security technology systems including access control for vehicles and individuals plus wide-ranging video surveillance, equipped perhaps with analytics.

Nothing is all that unusual about these measures. Then again, laws and regulations in different nations and local jurisdictions as well as U.S. laws about doing business in other countries can make applying these measures difficult.

“Privacy laws or industry regulations/best practices may prevent the networking of the card access, visitor registration or CCTV systems to central databases in the corporate headquarters,” Engel writes.

Then you would have to come up with a work-around. Engel suggests using a common ID card technology and standard card readers.

Some export control laws require that people from certain countries be escorted throughout entire buildings. Depending on the number of visitors to such a building, security might have to maintain a full-time escort staff, a system for verifying nationalities as well as a sophisticated access control system.

The U.S. government takes a great interest in which nations have access to certain kinds of U.S. intellectual property. “There are serious consequences for failing to protect confidential information,” Engel says. “You have to document people as a matter of course before giving them access to information. A few years ago, PPG was fined for the activities of its China subsidiary.

That happened in 2010. The U.S. fined PPG Industries and its China subsidiary $3.75 million for participating in a deal that delivered high-performance epoxy coatings to a Pakistan nuclear power plant with the government’s permission.

Then in 2012, the U.S. fined a state-owned Chinese company $3 million in connection with the same deal.

In the end, deploying physical security technology in foreign countries can grow extremely complicated thanks to national and local laws and regulations. It’s vital to check out the rules and to live by them.

How SIP-enabled intercoms open up communication with security departments

Making security easier for integrators to spec, install and program 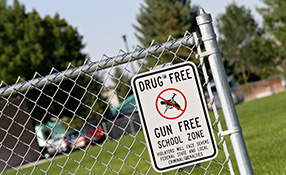